This Morgan Hill home had been lovingly renovated section by section with the exception of the kitchen, which the homeowners were a little challenged by.  The previous footprint of the space had the eating and dining in the middle, while prep areas were at opposite ends.  This set up often created chaos from well-meaning guests being in the middle of prep and inefficient traffic for home cooks.

We had a very clear mission to design better functionality, allow for multiple cooks, encourage entertainment without sacrificing prep space, and use beautiful materials.

The dining area was relocated to the far side of the kitchen and two islands were added to contain the prep area in a more manageable space.  Most people think that you can’t have more than one island unless your space is huge, but it’s really more about designing a kitchen that makes sense for how people live.  In this case, we had certain elements that we couldn’t move like the pantry nor did we want to relocate the appliances to radically different places.  These limitations severely reduced the counterspace.  But, home chefs need prep space and so it was necessary to create it.  And, with those parameters, we were able to land on a design that was a little less conventional, but no less beautiful.

The new design features a clean, transitional door style in white for the perimeter to contrast from the previous natural maple.  The clients wanted to add a touch of richness, so for the center island we used walnut and chose a raised panel door style with a little more detail.  Complementing both the walnut island and white cabinetry are natural walnut floors.  Having a deeper toned floor evokes a more polished feel. 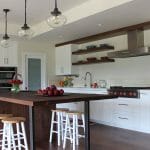